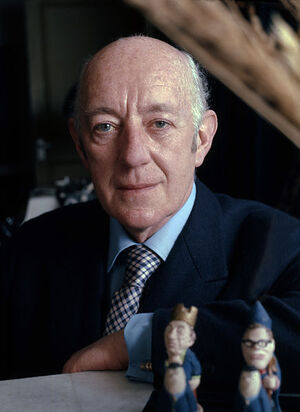 Sir Alec Guiness CBE was an English actor. After an early career on the stage he was featured in several of the Ealing Comedies, including Kind Hearts and Coronets in which he played eight different characters. However, he was probably best known for his six collaborations with David Lean: Herbert Pocket in Great Expectations (1946), Fagin in Oliver Twist (1948), Col. Nicholson in The Bridge on the River Kwai (1957, for which he won the Academy Award for Best Actor), Prince Faisal in Lawrence of Arabia (1962), Yevgraf in Doctor Zhivago (1965), and Professor Godbole in A Passage to India (1984). He is also well known for his portrayal of Obi-Wan Kenobi in George Lucas’s original Star Wars trilogy. He was one of the three major British actors, along with John Gielgud and Laurence Olivier, who, right after the Second World War, successfully transitioned from Shakespearean theatre in their home country to Hollywood blockbusters.

Community content is available under CC-BY-SA unless otherwise noted.
Advertisement